Ever since New York Knicks pint-sized guard Nate Robinson ruled over Dwight “Superman” Howard in the 2009 NBA Dunk Contest, rumors have been circulating as to whether or not this instant classic will ever publicly release. We have just received official word from Footlocker that the Nike Foamposite Lite “KryptoNate” will release on March 17th, 2009, at Harlem’s House of Hoops.The Krypto-Nate Nike Foamposite Lite will release in very limited numbers. When it is all said and done, could this sneaker be mentioned among the greatest All-Star Weekend sneakers such as the Reebok Pump Omni Lite “1991″ Dee Brown?

More Pictures After The Jump… 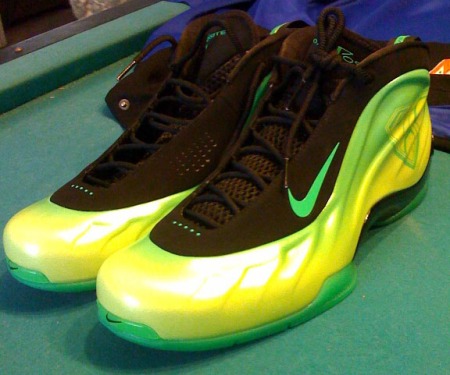 This entry was posted on Tuesday, March 3rd, 2009 at 12:31 am and is filed under basketball, NBA, Shoes. You can follow any responses to this entry through the RSS 2.0 feed. You can leave a response, or trackback from your own site.